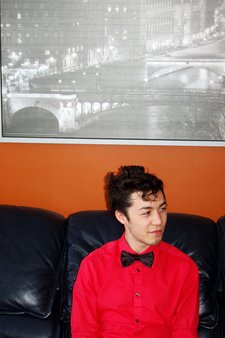 Ranging from soulful folk ballads to bright happy-go-lucky melodies, Chris Ho achieves a balance between lyrical introspection and melodic accessibility. Since first picking up the guitar at fifteen years old, Chris has been writing prolifically. Many of his old albums were haphazardly recorded using either an old 4-track tape recorder in his room, or a condenser microphone hooked up to a simple mixing board. But after joining forces with Rob Phillips and Robin Friesen, the group spent some time in 1 Ton Studios and recorded a 5-song EP entitled "Answers". The album is an eclectic mix of punchy, bright, vocal melodies, contrasted by moodier lyrics that capture the many contradictions of love, affection, and human nature.