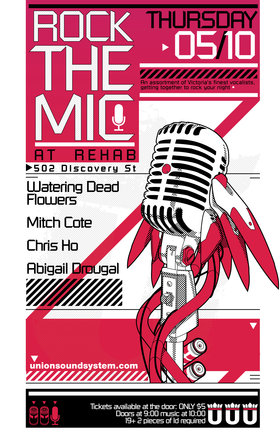 Music: Pop / Rock / Indie, Punk / Metal / Hardcore
Watering Dead Flowers
http://www.wateringdeadflowers.com/
Watering Dead Flowers is a three piece Alternative Metal band from Victoria BC, formed by Keith Campbell and Matt Noble through livevictoria.com. Skyler Wilson was asked join the band several months later to complete the trinity. After conquering the 2011 Victoria Canada Day Celebrations, Lucky Bar, Monty's Showroom Pub, and the Isabelle Reader Theatre, they've set there sights on the Farquhar Auditorium, McPherson Playhouse, and then... THE WORLD. With a 15 song self fianaced independant album soon to hit the shelves of your local record shop, this is one band that does not disappoint, with their unique sound and riveting live stage show, Skyler's dynamic drum arsenal, Matt's pulsing bass, and Keith's wailing guitar, this is a power house of epic proportions.

Mitch Cote is a ball of energy you've never seen on stage before. Armed with a mic and his acoustic guitar, he attacks full force with catchy songs of touching oneself while on facebook, to social commentary and observations, all backed the no holds barred hardcore and metal (with a dash of folk) influenced riffs and licks on an acoustic that take... more info

Ranging from soulful folk ballads to bright happy-go-lucky melodies, Chris Ho achieves a balance between lyrical introspection and melodic accessibility. Since first picking up the guitar at fifteen years old, Chris has been writing prolifically. Many of his old albums were haphazardly recorded using either an old 4-track tape recorder in his room,... more info
Submit info on this show to our admins