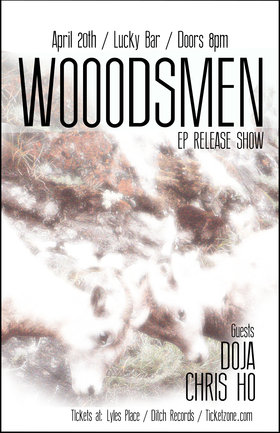 
Woodsmen✩
http://woodsmenband.bandcamp.com/
At first, Woodsmen seem like an accessible blend of blues, jazz and rock. A closer listen reveals electronic and prog rock influences that challenge the ear with unconventional time changes and experimental song structures. Their trademark energetic performances and poppy yet haunting lyrics have made them a household name in Victoria, BC and earned them a Vancouver Island Music Award nomination, airplay on CBC Radio, and opening gigs for Jon and Roy, Kytami, and the Zolas. With an upcoming EP produced by Sam Weber of Jets Overhead and plans for summer festivals, Woodsmen show no sign of slowing down.

Chris Ho✩
http://chrishomusic.com/
In his reclusive years, Chris Ho spent his time writing and recording at his home in Victoria, BC. Performing live on only the rarest occasions, Chris never hesitated to hand out his music to friends and strangers. He continued this pattern until a faithful fan base began to emerge with signed CDs and eager ears, forcing him out of a shell and onto a stage.

Doja✩
http://www.dojaofficial.com/
Doja had its start in 2004 when two friends, Ricky Lawrie and Brad Desjardins, asked fellow classmate Steve Kalkman to form a band with no intent other than to have fun and play music. The band continued all the way through their grade schooling in Abbotsford, BC; going through a few lineup changes and never actually having a proper band name. Throughout this period, the friends never played a single show but continued playing music for the sole purpose of creating art and enjoying the process of producing it.

Ranging from soulful folk ballads to bright happy-go-lucky melodies, Chris Ho achieves a balance between lyrical introspection and melodic accessibility. Since first picking up the guitar at fifteen years old, Chris has been writing prolifically. Many of his old albums were haphazardly recorded using either an old 4-track tape recorder in his room,... more info
Submit info on this show to our admins