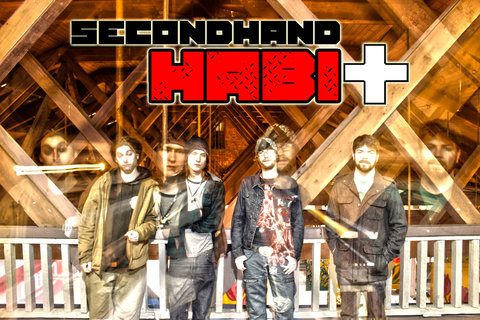 Jon
secondhandhabit@gmail.com
(250)507-7180
Contact Info
Past Shows (24)
Event Photo Galleries (1)
Formed in 2010 , Secondhand Habit came onto an unexpecting music scene and stood out immediately. The culmination of all the good parts of the 90's
that filled their first release , Badass, gave people a way to indulge their own inner youth and rekindle that unabashed child like spirit.

Continuing on with their musical journey they released the follow up to Badass in 2012, titled Striving for Mediocrity. With this record it showed that not
only had the band grown as song writers they had also begun the journey of adulthood and realizing their own mortality. Themes of time,
and the creeping feeling of never having enough carry on throughout the sophomore effort. Songs such as The Itch capture this with great
enthusiasm while the 7+ minute Hourglass carves out a tale of uncertainty of what lies ahead. The record also shows the youthful spirit
still remains with songs like What the Hell, an ode to awkward situations, or the lighthearted T.I.L.F.

Following the release of SFM Tenzin Sperl , lead singer , parted ways with the band to pursue other opportunities. Not being an easily discouraged bunch, the band decided to find a replacement. Enter Cody Vandal.

Right off the bat things seemed to come together with a song being written after their first jam together. Rehearsing and writing became the top priority and
within a few months the band was back and gigging again. Needing to fill out the sound
they recruited Daniel Lo on keys to round out the line up. Combining their talents the band
entered the studio to record their first EP with new lead singer Vandal in May 2013.
Working with Electric City Sound Eric Hogg and Marek Forsynski(Rated R),
the band crafted a 4 song EP titled Anaphylactic Rock.
No audio samples have been linked to this profile.

Status: Unknown
Ready to Rock - Last confirmed Apr. 27, 2014
Submit info on this band to our admins