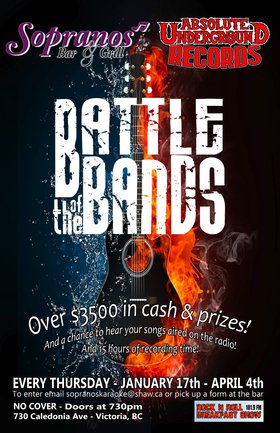 Formed in 2010 , Secondhand Habit came onto an unexpecting music scene and stood out immediately. The culmination of all the good parts of the 90's that filled their first release , Badass, gave people a way to indulge their own inner youth and rekindle that unabashed child like spirit. Continuing on with their musical journey they released th... more info

Mythical creatures need loving too. MC Unite! is a surf-punk-reggae party band from Victoria whose hilarious and unpredictable live shows have earned them fans up and down the island. Performances are usually accompanied by a “tickle trunk” of costumes for the band and audience members to don. Want to crowd-surf in a unicorn mask? Go for it. Cr... more info

Hometowns: Victoria & Salt Spring Island Members: Squirrel - Vocals/Guitars • Ozer - Guitar/Other strings• CC - Bass • Yoshi - Drums Not unlike their name's origin which stems from the Coastal Giant Salamander (one of the few salamanders capable of vocalization), the band can be found most often in their natural habitat. In temperate fore... more info
Audio: ON THIS DAY, KARMA
Submit info on this show to our admins