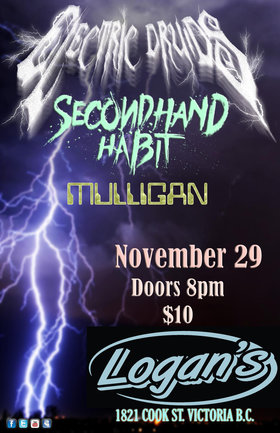 "So we've got a Beer Festival next Saturday and every band has cancelled" brought about the inception of the Band back in Swansea, UK late in the last millennium... The UK rag 'Kerrang!' described us as somewhere between Rush and Soundgarden. Now In 2019, relocated to Victoria, BC and armed with 35+ slabs of rock to blast your way, the trio can b... more info

Formed in 2010 , Secondhand Habit came onto an unexpecting music scene and stood out immediately. The culmination of all the good parts of the 90's that filled their first release , Badass, gave people a way to indulge their own inner youth and rekindle that unabashed child like spirit. Continuing on with their musical journey they released th... more info

"They just put punk back into alternative" -overheard at a previous event Mulligan is a four piece band hailing from Victoria, BC. Delving in genres such as grunge, punk, metal, and melodic hard-rock, Mulligan has come to be well-known for their high-energy, crowd-inclusive performances. Rather than focus on making sure every note is right and ... more info
Submit info on this show to our admins