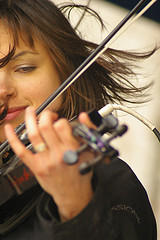 Kytami is a Vancouver-based electric violinist who has been playing for 23 years. One of the most versatile and sought-after musicians in her field, she has rocked with some of the best players in punk and metal as well as performing and recording with reggae, hip hop and jungle producers, DJ's and MC's. In 2002 she independently released her first album, titled "Conflation". Currently she hosts wednesday nights at DV8 Lounge and performs regularly with Third Eye Tribe, Lownote and Blackie LeBlanc.