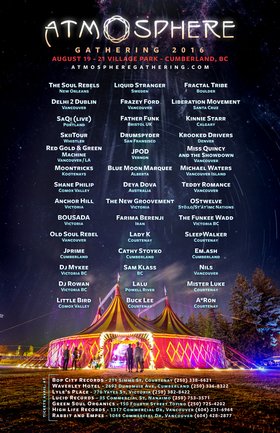 Atmosphere Gathering returns to the Village of Cumberland for a third year of immersive experiences. The community is a huge part of this gathering, providing a wonderful backdrop to our offerings of live and electronic elements to manifest an exciting multi-sensory extravaganza.

To label The Red Green and Gold Machine as simply “soul”, “reggae”, or “hip-hop” would be a disservice to their vision. Formed in 2010 after a fateful meeting at British Columbia’s Shambhala Festival, the group is anchored by the union of L.A. emcee Dr. Oop (of the bLAckloveR88rs) and Vancouver-based soul vocalist Tonye “Magic T” ... more info
Audio: Alarm Clock, Stop Trippin'

BOUSADA is one of the most intriguing artists on the West Coast right now. Ottawa-born, Graeme Bousada has travelled from coast to coast, working the land, building community activism and absorbing culture from all over Canada. After honing his skills on the guitar for many years, BOUSADA began drawing influence from the world of electronic music. ... more info

Swelling in primordial pulses and wholloping whoops, the tacit tones of Shane Philip's didgeridoo hold the power to still listeners into silence or encourage audiences to rise up in a tribal swell of intoxicating spirit -- with sometimes but a heartbeat in between. Meanwhile his hands will be skilfully juggling between shaking up rhythms with his a... more info
Audio: Masterpiece, Wheat Something
Submit info on this show to our admins