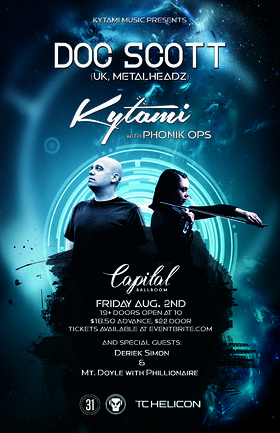 It's not often we have the chance to experience a TRUE originator. A true veteran and leading tastemaker in D&B, Doc Scott has been an essential and pivotal figure in the scene since before its inception and continues to push things forward. Founding member of "A Bunch Of Cuts", his DJ sets in the mid-90s became legendary, notably at the Metalheadz Blue Note sessions and "Speed". Although primarily a DJ, his productions are definitive classics within the scene, such as "Here Comes The Drumz" on Reinforced, the first ever Metalheadz release "VIP Drumz", to the more mellow sounds of "Tokyo Dawn" onGood Looking Records. His own label 31 Records, sparked by Scott's ground-breaking "Shadow Boxing", has also been a hub for new talent, pushing some of the biggest artists today in their early days. Having recently re-launched the label, Om Unit's remix of "ShadowBoxing" is the first release of 2014, with many others to follow. The New Year also marks afresh start for Doc Scott, as he makes his long awaited return to the studio.

Do yourself a favour and read this interview https://www.darkdnb.com/doc-scottIm
"a DJ who makes music, always a DJ first." (doc scott 1996)

This is also a good read https://www.electronicbeats.net/martynanddocscott/

Violinist Kytami is an artist who has managed to soar above the constraints of musical genre and labeling. She has forged a path so bold and unique that it has won her awards such as “Live Act of The Year” at the 2013 Vancouver Island Music Awards, as well as a WCMA 2017 nomination for her EP “Renegade” and a WCMA 2013 win for “Electronic/Dance Recording of the Year” for her LP “Kytami”.
Through a mix of classical and fiddle styles fused with heavy bass elements of DnB, Dubstep and Hip Hop, Kytami has developed a steadily growing reputation for her dynamic performances. She has appeared at festivals and major events such as Valhalla (QC), Shambhala (BC), Rifflandia (BC), Evolve (NB), CMW (ON), Music Matters (Singapore), Rock the Shores (BC) and Tallinn Music Week (EE), as well as opening on tour for heavyweight superstars Datsik and Dub FX.
This girl doesn't just play shows, she absolutely detonates dance floors. Kytami is internationally renowned for one thing: she rocks the fiddle like a woman possessed... and the audience dances to match.

Sometimes referred to as a “violinist extremist,” Kytami (a.k.a. Kyla Uyede) is a classically trained prodigy who has long been considered one of Canada’s most diverse and electrifying violin virtuosos. This charismatic and energetic performer takes a similarly athletic approach to her music, bounding between classical and fiddle styles whil... more info
Submit info on this show to our admins