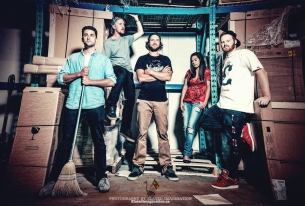 Building on the traditions of reggae and dub music, Vancouver's Giraffe Aftermath use hip-hop rhythms and a psychedelic approach to create a unique blend of lively, danceable music.

Formed in 2006 by Steve Hackenbruch and Luke de Villiers, this songwriting/production duo remains the core of the band's music. Joined on stage by Paul Steffes and a revolving cast of peripheral players, Giraffe Aftermath throw down a foundation of groove and airtight vocal harmonies.

Sound speaks for itself, check out the facebook page
http://www.facebook.com/giraffeaftermath?sk=wall

In this video: Giraffe Aftermath
Posted: Jun. 6, 2013
Status: Available for Shows/Gigs
- Last confirmed Mar. 10, 2015
Submit info on this band to our admins