Music: Hip Hop / Rap, Jazz / Blues, Reggae / Ska / Dub
Late show, main stage: Giraffe Aftermath, The Debonaires (LA), The Revivers (LA)
Building on the traditions of reggae and dub music, Giraffe Aftermath use hip-hop rhythms and a psychedelic approach to create a unique blend of lively, danceable music. Formed in 2006 by Steve Hackenbruch and Luke de Villiers, this songwriting/production duo remains the core of the band's music. Joined on stage by Paul Steffes and a revolving cast of peripheral players, Giraffe Aftermath throw down a foundation of groove and airtight vocal harmonies. http://www.facebook.com/giraffeaftermath
The Debonaires are a dynamic group of musicians who pay tribute to the classic sounds of Jamaican Ska, Rocksteady, and Reggae through their unique renditions of these early styles.
https://www.facebook.com/thedebonaires
Doors: 8:30 pm. $8
Railway North stage: Return of the Stern
Doors: 9, show 9:30 pm. Admission: by donation
For the last 4 years, Return of the Stern has been bringing their funky music around town. Playing a combination of originals and covers, the four-piece band has garnered attention for their honest, fun, and fresh approach to funk-jazz, and has served as the backing band for several local artists. Groove, Solo, Repeat.
https://www.facebook.com/returnofthestern
Early show, main stage: Supper Show! Featuring Philadelphia Collins
7:30PM - 8:30PM Admission: FREE

The Debonaires incorporate soul, jazz and funk while remaining ever faithful to the Jamaican sounds of ska, rocksteady and reggae music. Born out of Riverside, California in 1995, the nine musicians currently reside throughout the state. Built of a rough rhythm section, dynamic horn section, and vocalist, the Debonaires have shared the stage with r... more info
Audio: Chaos, Accusations, Out of My Life
Videos: 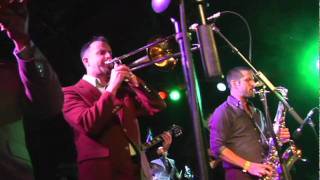 The Revivers are a California group that plays ska and reggae in the spirit of the classic Studio One and Trojan recording artists. This group of ska veterans includes members of The Debonaires as well as The Skeletons. Though reformed in 2009, they’ve already played with such legends as Michael Rose, The Mighty Diamonds, and Eric “Monty” Mor... more info
Articles: Album of the Month: July, 2013
Videos: