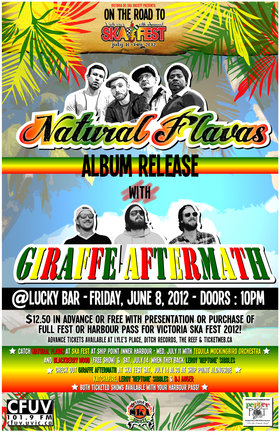 Music: Funk / R&B, Hip Hop / Rap, Jazz / Blues, Pop / Rock / Indie, Reggae / Ska / Dub
Victoria BC Ska Society is proud to announce that Natural Flavas is having their long-awaited album release at Lucky Bar, Victoria ON FRIDAY, JUNE 8TH WITH Giraffe Aftermath. Those that present (or purchase) Full Festival or Harbour Passes at the door will get in free of charge (Note there is limited capacity at Lucky Bar and this promotion has limited quantities so if you have the Full Fest or Harbour Pass show up earlier to present it for free admission)

NATURAL FLAVAS are busy again leading up to the Victoria Ska Festival. As you know they backed rocksteady legend Ken Boothe and Kae Sun at last year's Ska Fest. This year they will be playing on Ska Fest again individually on Wed/July/11th with Tequila Mockingbird Orchestra and Blackberry Wood + they'll be backing Leroy 'Heptone' Sibbles at the Grand Finale Concert on Saturday, July 14th alongside New Zealand's all Maori reggae outfit Katchafire and Vancouver's Giraffe Aftermath.

GIRAFFE AFTERMATH continue to be busy in Vancouver headlining shows with various regional bands. Additionally the band has been landed some amazing supporting gigs both in Victoria and Vancouver including opening up for Yellowman & Sagittarius Band, Katchafire, The Black Seeds and John Brown's Body. They also just finished their brand new album which was released earlier this year. You'll get to hear all the hits from their new album as well as some of the oldies from previous albums and eps.

other sites: myspace
NATURAL FLAVAS is a unique project , simultaneously an original band while also working as a backing band for touring artists. Under their own name Natural Flavas produces original reggae that parallels the current Jamaican scene while remaining uniquely Canadian. They’ve gained quite a reputation locally , opening for Toots & The Maytals , Inner... more info
Audio: Time
Articles: In Your Facefest!