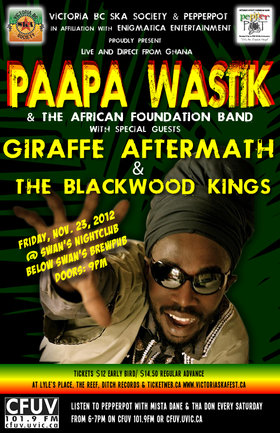 Listen to Pepperpot - Victoria's Hypest Caribbean Radio every Saturday from 6-7pm on CFUV 101.9FM or CFUV.UVIC.CA to hear the music from these artists and for chances to win tickets!

Friday, November 23 @ Swan's Nightclub (downstairs from Swan's Pub) - Pepperpot Victoria's Hypest Caribbean Radio and Victoria BC Ska Society are teaming up Victoria a likkle bit of conscious dancehall, roots reggae and ska all on one show (just like we LOVE it)! It's been too long since we've had a dancehall/conscious reggae party and we thought the end of November would be the perfect time to host one in our hype new venue downstairs at Swan's (formerly Neptune Sound Bar).

Hailing from Cape Coast, Ghana (Africa) Paapa Wastik has had a rich history growing up with music all around him since he was a small child. During his teen years he found Rasta and went on in the early 2000s to create a brand new musical sub genre in Ghana known as "Roots-Life Music", a fusion of reggae, soca, soul, highlife and African classical/traditional music. In 2003 Paapa Wastik was invited to perform at the annual "Panafest", an internationally acclaimed Pan-African Festival. Within the same year the international reggae production group "Greenlion Sounds" teamed up with Paapa Wastik to produce some songs, which was featured on "Greenlion in Ghana" CD mix. Making progressive steps in his talent and music mission, Paapa Wastik crossed over to the United States where he established an independent record label, Asaase Music Foundation.

For the past ten years Paapa Wastik has been traveling in between Ghana, Africa, Jamaica and the United States producing and performing alongside various artists some of which include: Anthony B, Lutan Fyah, Capleton, Tony Rebel, Queen Ifrica, Warrior King and many more.

Notable appearances include Paapa Wastik's headlining appearance at the Northwest Reggae Festival in Eugene, Oregon and another unforgettable appearance at Victoria's 8th Annual Ska Festival at Market Square alongside Mexico's Los Rastrillos, Jamaica's The Itals, The Drastics and the now defunct Arbutus Trio.

Now Paapa Wastik and the African Foundation Band have a new album called "Unity for Africa" His appearance after a five year absence from Canada is in support of this album.

We all know Giraffe Aftermath is awesome. As one of Victoria's favourite reggae bands from Vancouver we're extremely happy to have them back after their last appearance in Victoria at the Victoria Ska Festival when they played alongside Leroy 'Heptone' Sibbles and Katchafire.

As we've said before, Blackwood Kings bring straight up ska and reggae to any show they're playing on. Blackwood Kings have been performing throughout Victoria with various local bands. Michael Luis - drummer of the band is also the leader of UVIC's ska/reggae club that is just getting off the ground.

Paapa Wastik brings us reggae/dancehall sounds live and direct from Ghana, Mount Zion, Africa. With his new album "Thanks and Praise" coming on Tuff Gong this summer and doing tracks with Jamaica's Lutan Fyah Paapa Wastik is a treasure waiting to be discovered. more info
Audio: Woman