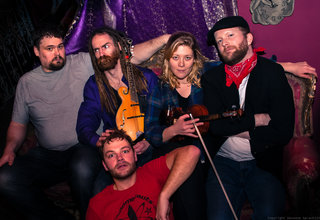 A Vancouver institution, THE DREADNOUGHTS are a roaring sea shanty, wrapped up in folk melody and powered by an old-school street punk aesthetic. The Dreadnoughts lay down furiously energetic yet highly melodic punk music that has kept them atop of the west coast punk scene for more than a decade. Self-described as “Vancouver's biggest, baddest, drunkest, punkest folk band,” The Dreadnoughts have been long recognized as one of the city's most spectacular live bands, with shows that embrace the chaos that keeps punk as such a lively, viable art form. A night out with The Dreadnoughts is going to involve getting kicked in the ears, raising more than a few beers in triumph and, if they have their way, with an audience passed out from exhaustion.

Status: Available for Shows/Gigs
- Last confirmed Apr. 14, 2018
Submit info on this band to our admins