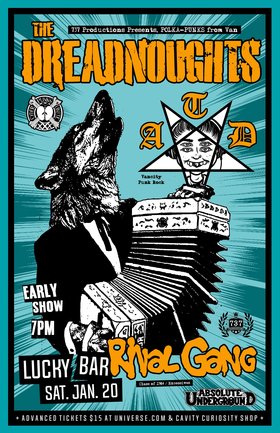 The new album was written as a tribute to Veterans of, and those who died during WWI. Although the music is dealing with much more serious subject matter, it still carries that raucous energy that we've all come to love and expect from the band.

They're just back from Eastern Canada selling out venues. This is not to be missed.

Traveling over with them are ATD One of 737's favourite bands from Vancouver (they also share a drummer with the Dreadnoughts). They're bringing their brand of high energy, punch you in the balls, and steal your girlfriend punk. They've got 3 eps out now: Kill Yourselfie, Bunk Monk, and Waist + Tragedy. They also made an appearance on Rebels Sing, A Tribute to The Rebel Spell.

Warming up the stage are Victoria locals, Rival Gang. Featuring ex members of Class of 1984, The Excessives and The Real McKenzie's, I honestly don't know what to say. They'll probably crank out some classic Excessives tunes and maybe some other stuff.

A Vancouver institution, THE DREADNOUGHTS are a roaring sea shanty, wrapped up in folk melody and powered by an old-school street punk aesthetic. The Dreadnoughts lay down furiously energetic yet highly melodic punk music that has kept them atop of the west coast punk scene for more than a decade. Self-described as “Vancouver's biggest, baddest, ... more info
Audio: The West Country
Submit info on this show to our admins