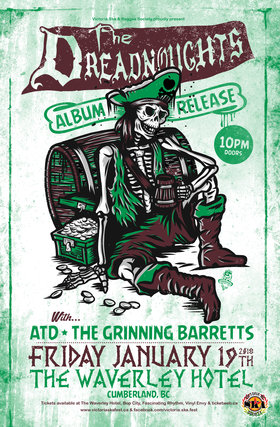 Music: Folk / Celtic / Latin / World, Punk / Metal / Hardcore
It's been seven years since Vancouver's punk kings have graced the Island with their presence. The last time was a fundraiser for a member of Victoria's Hillside Hooligans who now we're glad to say is happy, healthy and active in the Island ska/reggae/punk scene.

The Dreadnoughts have become one of Canada's most exciting Celtic punk bands. Often referred to in the same vein as The Real McKenzies, The Dreadnoughts describe themselves as being, "one part roaring sea shanty, one part haunting folk melody, and a solid chaser of gut-crunching street punk." All of this equals one of the most entertaining and hard hitting Celtic punk bands on the west coast of Canada.

Joining them will be another friend of the west coast Canadian punk scene ATD short for "A Total Disappointment" (they're just kidding) also hailing from Vancouver. ATD have made a name for themselves in Vancouver's punk scene often playing at Pub 340 and opening for other punk Canadian legends and up and coming bands such as The Real McKenzies and The Flatliners.

Rounding out the bill will be The Grinning Barretts who will be making their Cumberland debut. More quality Celtic punk with these guys...The Grinning Barretts feature founding members of Skafest veterans The Kiltlifters. This BAGPIPE driven, Celtic infused, Guinness fuelled, 5 piece deliver a range of originals from floor stompin', table poundin' traditional Irish, to catchy, " waketheFup" Irish punk anthems.

A Vancouver institution, THE DREADNOUGHTS are a roaring sea shanty, wrapped up in folk melody and powered by an old-school street punk aesthetic. The Dreadnoughts lay down furiously energetic yet highly melodic punk music that has kept them atop of the west coast punk scene for more than a decade. Self-described as “Vancouver's biggest, baddest, ... more info
Audio: The West Country
Submit info on this show to our admins