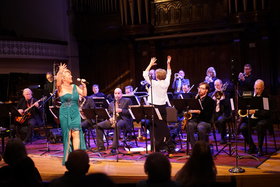 Music: Classical, Jazz / Blues
Come to Wood Hall at the Victoria Conservatory of Music on March 8 and join the community by helping the Victoria Jazz Orchestra raise $25K over the next year for a studio recording because it is time! Joined by special guest Maria Manna, the orchestra will play some of their favourites. Over the past years the VJO has performed with many wonderful guests such as New York pianist Dave Kikosky, Toronto bandleader Chelsea McBride, Mike Allen, Alan Matheson, Andrew Homzy and at Jazz Festivals on Vancouver Island.

Admission is by donation at the door. You can also donate on our Patreon page here: https://www.patreon.com/join/3697514/checkout