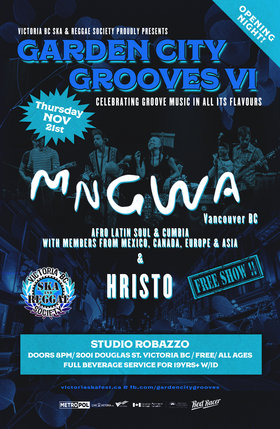 Music: Electronic / DJ, Folk / Celtic / Latin / World, Funk / R&B, Hip Hop / Rap
Garden City Grooves is taking over Victoria once again with three jam-packed days of an astonishingly diverse array of groove and rhythm to get the capital city jumping once again; and we're getting kicked off on Night 1 with a very special, completely FREE party to get us started in style!

Vancouver's groove-juggernaut MGNWA is coming across the Georgia Straight to lay down the funky-fresh sounds that define this incredible band. While the musical spirit of MGNWA is rooted in South American cumbia, their Vancouver home has allowed MGNWA ample opportunity to absorb influences from far and wide, blending hip-hop, dub, psychedelic rock and even surf rock into their ultra-unique sonic stew. Their undeniable talent and energy has helped get them on the radar of Latin music fans worldwide, and with members from across Europe, Mexico and Canada, the band is seemingly limitless in the variety of sounds it can build.

Joining MGNWA for our kickoff party is legendary west-coast selector, HRISTO. A man of indefatigable taste and knowledge, Hristo comes armed with a mind-boggling arsenal of rare and interesting records from around the world of music. You may never know what exactly a visit from Hristo is going to yield, but you can be guaranteed, it's going to be impossible not to dance.

Mngwa (Pronounced [ming-wah]) is an 8-piece experimental Latin band based in Vancouver, but their spirit is rooted in the cumbia of South America. Far removed from a cohesive Latin music scene, Mngwa has created their own singular style, mixing psych rock, dub, hip hop, and surf influences into their afro-latin polyrhythmic pot. After 3 years of bl... more info
Videos: