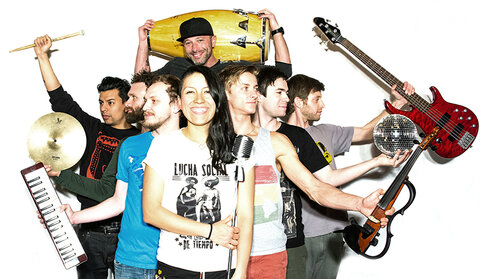 Mngwa (Pronounced [ming-wah]) is an 8-piece experimental Latin band based in Vancouver, but their spirit is rooted in the cumbia of South America. Far removed from a cohesive Latin music scene, Mngwa has created their own singular style, mixing psych rock, dub, hip hop, and surf influences into their afro-latin polyrhythmic pot. After 3 years of blasting unsuspecting Canadian audiences, Mngwa is pushing their northern strain of cumbia ever-further, reaching fans of Latin music worldwide.

With band members from across Europe, Canada and Mexico, Mngwa makes wild new music that jumps many boundaries without ever losing the groove. Following a breakthrough 2015 that included the release of their debut Vancumbia Ambush EP, Canadian festival appearances, and a Mexican tour, Mngwa is preparing to record their full-length debut and broadcast their sound into the distant cosmos.
No audio samples have been linked to this profile.
No member roster has been entered (to link to musician profiles.)