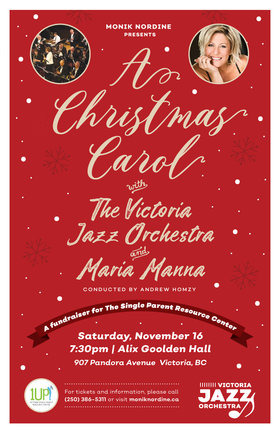 joined by the Cathedral School Choir

This November you can get jazzy in a festive way with the Victoria Jazz Orchestra. Monik Nordine is putting on a concert at Alix Goolden featuring the Orchestra with guests Maria Manna on vocals, and the Cathedral School Choir. Conducting them all will be Andrew Homzy, the Artistic Director of the Nanaimo International Jazz Festival. The event is being held to raise funds and awareness for the Single Parent Resource Center, located here in Victoria.

A staggering 50% of children living in single parent homes are living in poverty and child poverty rates in BC remain above the national average. The Single Parent Resource Centre provides free clothing, food, counseling and Christmas gifts for families in need. By helping the folks at the Single Parent Resource Centre you will be directly and positively impacting the lives of children.

Alfons Fear is a versatile trumpet player. A native of Victoria, Alfons performs jazz, classical, and contemporary music. He has a B.Mus. (2014) from the University of Victoria majoring in music composition and a diploma in jazz studies from Humber College (1994). At UVIC Alfons studied composition with John Celona and studied trumpet pedagogy with... more info

Scott MacInnes, although still youthful, has gathered a sizable amount of musical experiences. Upon finishing his Undergraduate Degree, in Classical Music Performance on the bass trombone at the University of Toronto, Scott free-lanced in the Greater Toronto Area and throughout Ontario, playing with a great number of ensembles, including: the Toron... more info
Submit info on this show to our admins