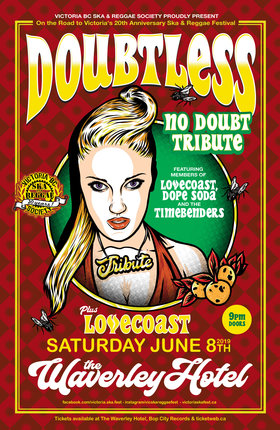 Music: Funk / R&B, Hip Hop / Rap, Pop / Rock / Indie, Reggae / Ska / Dub
Victoria BC Ska & Reggae Society is excited to bring a bit of nostaliga along with involving some of your favourite Island bands in a new tribute show never presented in the Comox Valley. Please give a warm round of applause to DOUBTLESS - A Tribute to No Doubt featuring members of Lovecoast, Dope Soda, & The Timebenders.

Although we don't do tribute shows very often, when we do we like to do them up right!

Last year DOUBTLESS debuted at Victoria's 19th Annual Ska & Reggae Festival and the show was a hit with well over 400 paid attendees singing their favourite No Doubt anthems at the top of their lungs!

No Doubt have been a part of many of our childhoods and early adulthoods for many years. The band still exists although the last time they toured Canada was back in 2009. But they are still very much in our hearts and minds and have influenced multiple generations.

Props to Danielle Sweeney leader of Lovecoast that has taken the time to round up her musical allies to bring this together!

Her band Lovecoast will be opening up for Doubtless that are awesome in their own right.