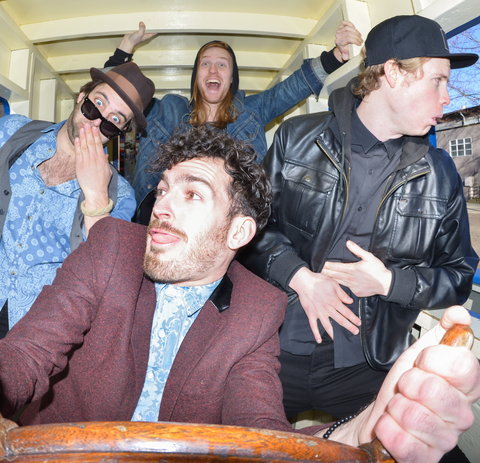 Rock from Victoria BC
Label: indie
Available for Shows/Gigs - Confirmed: May. 16, 2015 (Awaiting Update)

Rod Campbell
rod@mindilbeachmarkets.com
16047417525
Contact Info
Past Shows (48)
Event Photo Galleries (1)
For a group with a complex list of influences, Mindil Beach is simply named after a coastline in Darwin, Australia. Through the skillful blending of rock, hip hop, reggae, funk and folk, they've created sonic cocktail that is equal parts soul, adrenaline and swagger. Their diversity of appeal has enabled them to play alongside a wide variety of notable acts (Sam Roberts, USS, Bedouin Soundclash), but no matter the size of the venue, every Mindil Beach show feels like you're dancing in your living room.

After the release of their sophomore record, It Might Take Long (2013), Mindil Beach found themselves at a crossroads. Local success of the album's lead single, Smoking Gun, served as a springboard for national exposure, and they opted to leave Vancouver Island for a more nomadic lifestyle. After spending nearly a year in an RV, Mindil Beach have now put down roots in Vancouver and are working on their third full length album.

The band’s passion for music goes hand in hand with their passion for the environment. In 2011, the boys founded The Jellyfish Project, an environmental initiative targeting Canadian high school and middle school students to generate awareness about ocean sustainability, climate change and environmental stewardship. The program has been presented in more than 100 schools to over 50,000 students, and has partnered with the Vancouver Aquarium and the David Suzuki Foundation.

They've been called “a group that can fly the flag for Canadian rock overseas” and they intend to do so. Mindil Beach will be celebrating the release of their latest project, The Sweet Tea EP, at Victoria Ska & Reggae Fest on July 1st.