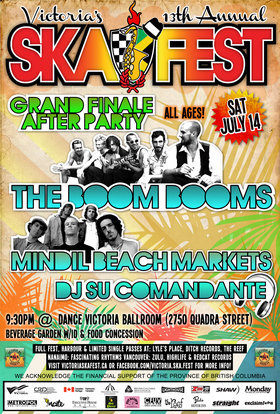 All Ages/Beverage Garden w/ID. + Food Concession.
No ins and outs.

Vancouver THE BOOM BOOMS play a dangerous mix of Latin, funk, and reggae that sets the dancefloor on fire wherever they play. The group draws influence from artists such as Buena Vista Social Club, Gregory Isaacs, and Manu Chao. Their song "Delivered" earned them the award for Best Roots Song at the Just Plain Folks Music Awards. http://www.theboombooms.com/

Explosive, dynamic, and original, MINDIL BEACH MARKETS has discovered a blistering fusion of Rock, Reggae, Hip Hop, Folk, Funk, and Blues that is entirely their own. Their songs will leave you awash in sentiments ranging from love of the planet, to love of a party. http://www.mindilbeachmarkets.com/

DJ SU COMANDANTE has evolved to be one of Victoria's most diverse DJs spinning a variety of reggae, dancehall, Latin and reggaeton (reggae infused with Latin influences). His music also mirrors his beliefs in revolution and social justice. Coming from Guatemala his Latin influences give a distintive uniqueness to his mixes.

"Some of the tightest, smoothest, sexiest soul and funk produced in the city right now comes courtesy of six guys who all grew up within a few blocks of each other on Vancouver’s East Side." -The Georgia Straight The Boom Booms are an Indie Soul band from Vancouver, BC. The group consists of brothers Aaron Ross (lead vocals) and Sean Ross (k... more info

DJ Su Comandante has evolved to be one of the most diverse DJs spinning a variety of reggae, dancehall, Latin and reggaeton (reggae infused with Latin influences) on the west coast of Canada. Now residing in Vancouver his music also mirrors his beliefs in revolution and social justice. Coming from El Salvador his Latin influences give a distintive ... more info
Submit info on this show to our admins