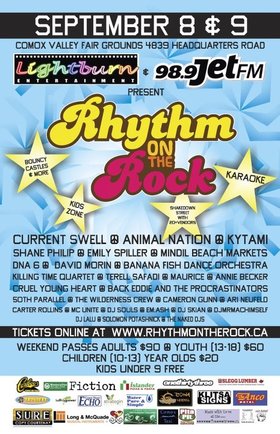 Location: The Rotary Bowl at the Comox Valley Exhibition Grounds
This years festival will once again showcase the Best Musical Talent from the West Coast and Beyond!
Time: 1pm - 11pm on Sat & Sun, plus after parties with live music at local pubs on Saturday night!

***Get set to check out a wide variety of Artists ranging from Rock, Folk, Hip Hop Country, Pop, and Electronic***
ALL AGES WELCOME


check out all our details online including buying online tickets at:
http://www.rhythmontherock.ca/


VIP ALL-ACCESS packages available for a limited time too... VERY LIMITED IN NUMBER.


Plus additional pre-show & after-party performances by:

Rhythm on the Rock Music Fest will continue to provide a safe, fun environment for all ages to enjoy the best of the Up and Coming westcoast musical talent, local artists and vendors, workshops, culture, dance, and art in the heart of the Comox Valley!! http://www.rhythmontherock.ca

Swelling in primordial pulses and wholloping whoops, the tacit tones of Shane Philip's didgeridoo hold the power to still listeners into silence or encourage audiences to rise up in a tribal swell of intoxicating spirit -- with sometimes but a heartbeat in between. Meanwhile his hands will be skilfully juggling between shaking up rhythms with his a... more info
Audio: Masterpiece, Wheat Something

Sometimes from bad luck or circumstance amazing opportunities and transformations can arrise. This is much the case for Maurice. From major label signings and lofty expectations to tamult and shattered dreams out of mishandled potential and naivety, Jean-Paul Maurice was able to pick up the pieces of a misdirected career path and a dysfunctional re... more info
Submit info on this show to our admins