Celtic, Gypsy Jazz, Bluegrass from Victoria BC
Available for Shows/Gigs

from Duncan BC
Available for Shows/Gigs

OLIVER GANNON:
Juno Award winning guitarist Oliver Gannon, who graduated from Berklee College of Music in 1969, has been very active in the Canadian jazz scene since the early 1970's. He has performed at major jazz festivals in Europe and North America, including three concert tours of the former USSR. Gannon has five stellar recordings to his name and is on over a dozen recordings by some of the world's greatest jazz players including Fraser MacPherson, Ian McDougall and Ross Taggart. Gannon currently performers with the following groups: The Oliver Gannon Quartet (with Miles Black, Miles Hill and Blaine Wikjord), The Oliver Gannon and Patty Harvey Quartet (with Al Wold and John Nolan) and The Ian McDougall Sextet. In 2002 Gannon was elected "Jazz Guitarist of the Year" by Canadian Jazz Awards.


CORY PESATURO:
World Digital Accordion Champion (Coupe Mondiale) and World Acoustic Accordion Champion (Primus Ikaalinen) Cory Pesaturo is a graduate of the prestigious New England Conservatory of Music in Boston, where he was the first musician ever to major and graduate in the accordion. Cory is in fact, the only person to ever win World Championships on Acoustic Accordion, Digital Accordion, and Jazz. Accordion Legend Dick Contino said when Cory was only 15, “Of all the accordionists I’ve seen over the years, Cory is the one to pass the torch to, the only one who has all the tools to bring the accordion back to its former glory.” Pesaturo's extensive resumé includes appearances at the White House for President and Mrs. Clinton on 4 different occasions. Cory has performed in 5 different continents, from Italy, to Canada, to New Zealand, to Japan and Tunisia. He is known as both a visionary and an outspoken rebel of the "accordion world".

QUINN BACHAND:
20-year old Quinn Bachand has proven himself beyond quinn-tessential to Canada’s contribution to the world stage. One half of the symbiotic brother-and-sister talent-trust Qristina and Quinn Bachand, the pair have released 3 genre-busting albums to global acclaim. Quinn’s gyspy-jazz side project, Brishen, has likewise turned heads to this master of musical styles and all things stringed. His adventurous spirit and achievements belie his tender age, indicating an old soul with more years than most to further progress across his inventive musical paths, while reaping in the recognition: including the 2014 Djangofest Award, an Emerging Artist Finalist position in "Canada's Walk of Fame", a 4-year Scholarship to the esteemed Berklee College of Music, not to mention a quinn-tet of Canadian Folk Music Award nominations, including New Emerging Artist of the Year, Young Performer of the Year, Ensemble of the Year, Instrumental Album of the Year and World Group of the Year.

BRISHEN:
“Brishen”, a Romany word for “bringer of the storm”, is exactly what Quinn Bachand and his talented band serve up each time they perform! Think Django Reinhardt and current players like Biréli Lagrène and Sylvain Luc, as this talented teenager and his fellow Brishen-ers lay waste to Django classics and Hot Club-esque originals alike. Quinn and Co. burn and swing their way through Reinhardt covers, freshly-constructed originals and trad tunes in the Hot Club tradition of 1930s Paris, including the twisting of more contemporary numbers. Brishen is 100% pure gypsy soul, conjuring up the smoky bistros of France from a more innocent time before music was amplified and when string bands were all the rage. Indeed, the wonder of Brishen, as a spirited storm itself, is that it knows no bounds, forever changing the landscape with awe-inspiring effect.

Advance tickets at Ivy's Bookshop, Lyle's Place and Tempo Trend, as well as online at www.beaconridgeproductions.com 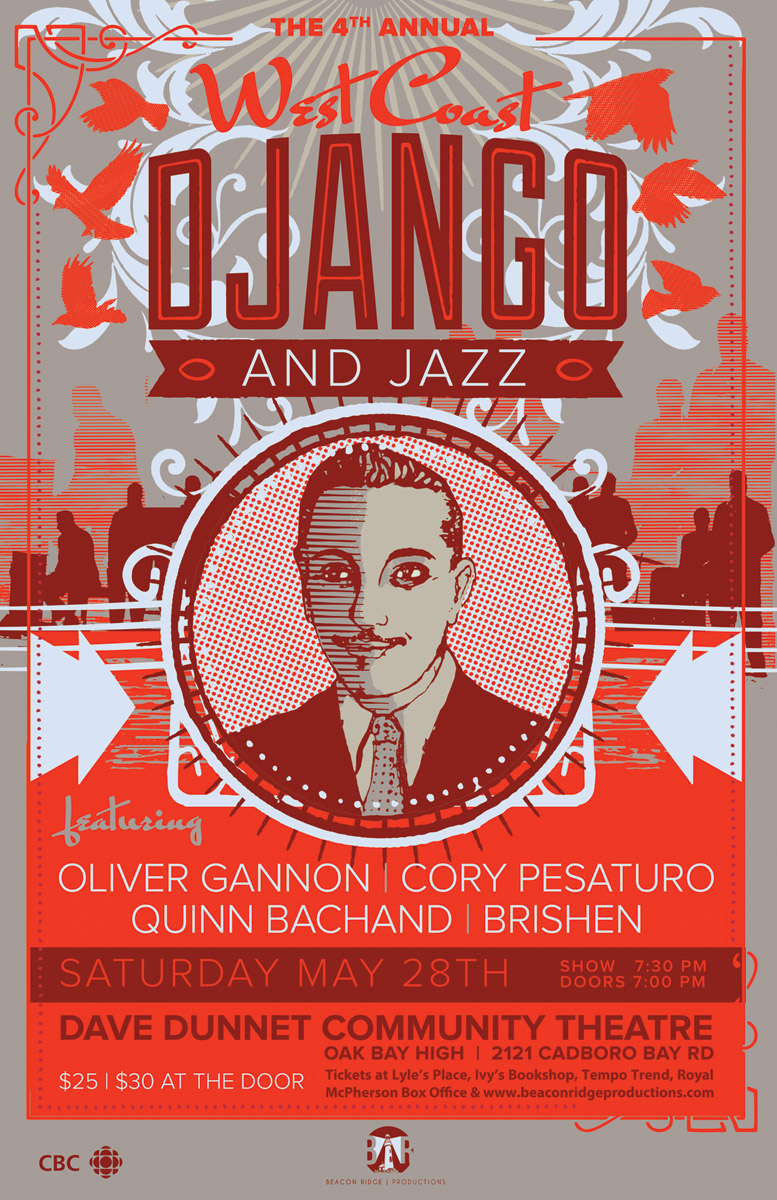