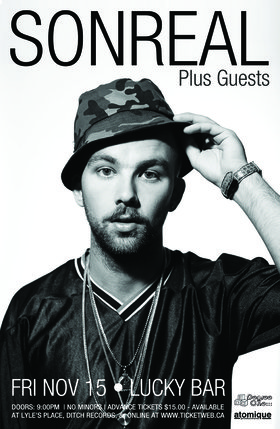 Atomique Productions and Degree One present

SonReal is a new school leader. This young artist has independently put all eyes on him through consistently putting out interesting, innovative material, for his ever- expanding fanbase. SonReal's earliest release, Good Morning (2008) was a quality record that solidified a foundation for SonReal to continue making great music in Canada. The album developed SonReal as an artist to be taken seriously in not only Canada though, but across the globe.

November 13th, 2009, SonReal's follow up album, The Stroll, dropped internationally online. The Stroll is described as funky, innovative, and most notably a feel good record. SonReal's edgy, melodic swagger combined with a positive message makes this record a great listen from front to back. The Stroll has guest appearances from Canada's top female artist Eternia and XXL featured Joe Scudda, as well as production from super producer Rich Kidd (Busta Rhymes, Drake, K-Os), and DJ Crown from France (Satellite Music/Major). The Stroll allowed SonReal to develop great working relationships with some of Canada's most respected music industry professionals.

July 2nd, 2010, SonReal released his third studio project entitled, The Lightyear Mixtape. Having recorded the 18 track project in a four month period, this new artists motivation and constant drive lead him to achieving independent success on an international scale. The Lightyear Mixtape radiated across Canada and it's lead single, Already There feat. Rich Kidd was the driving force behind it. Already There resulted in SonReal's first VideoFACT award. The video was an instant smash and was aired close to 90 times on Much Music and over 600 times on the sister channel, Much Vibe. The video was instantly added to the Much Music Top 30 where it stayed for a month. Already There was later nominated for Single of The Year alongside Drake, Kardinal Offishall and others at the 2011 Stylus Awards in Toronto, Ontario.

February 28th, 2011, SonReal released a highly anticipated full-length project titled, Where's Waldo? Being labeled SonReal's most diverse work to date, this project showcases raw creativity and demonstrates a clever approach to Hip-Hop music. Where's Waldo? features some of Canada's most respected artists such as Eternia, Saukrates and fellow up and comer, Rich Kidd. With six videos released independently since The Lightyear Mixtape as well as production from both sides of the boarder, Where's Waldo? has turned heads in the industry and received close to ten times the attention of SonReal's previous release. The album recently went on to be nominated for Best Rap Recording at the 2011 Western Canada Music Awards. SonReal also was awarded the opportunity to shoot his 2nd straight VideoFACT funded video for the single off Where's Waldo? called, Haunted feat. Ali Milner. Haunted and She Gone both received over 100,000 views in their first month online.

SonReal is currently putting the final touches on what is to be his best work yet. Fresh off the success of a number of releases online, SonReal is preparing to drop the highly anticipated album, Good News. Featuring some of Canada's top producers such as Arthur McArthur (Drake, Rick Ross, Lil Wayne), Chin Injeti (Eminem, Dr Dre) and MoSS (Eternia, Obie Trice). Good News will captivate a much larger audience and solidify SonReal as one of Canada's hardest working hip hop protégés.

SonReal is a new school leader. With a 2014 Juno nomination, this young artist has independently put all eyes on him through consistently putting out interesting innovative material. Notorious for releasing mixtapes that have an album feel, it is easy to see why SonReal is at the forefront of not only Vancouver's hip hop scene, but the Canadian mus... more info

Jesse Manason is a solo / session drummer from Victoria, BC. He has become one of the most sought after drummers on the West Coast, known for stealing shows with his high energy live performance and unique & signature style. *Available for live gigs and recording. more info
Submit info on this show to our admins