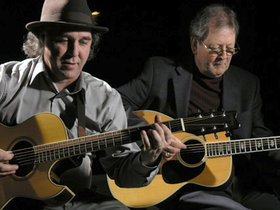 Los Gringos Locos have also been regularly featured at the Butchart Gardens, Vista 18, the Superior Cafe as well as numerous cafes, pubs and private functions. They have been featured on the A Channel morning show and have received favourable air play on local radio stations. Their music has also been featured on a number of documentary videos.

The instrumental acoustic guitar duo, Los Gringos Locos, featuring Al Sabourin and Mike Sampson, are well known to Victoria, having entertained audiences with their unique blend of standards and original compositions since 2000. They have developed a steady following playing at numerous festivals and events in Victoria and on Vancouver Island. T... more info
Audio: Malaga, La Vista, Namaste

other sites: terrybrennan
FROM YORKVILLE VILLAGE TO THE PACIFIC COAST...A SONGWRITER'S JOURNEY From the tradition of Bob Dylan, Gordon Lightfoot, John Prine and Steve Earle comes a troubadour straight out of the heart and soil of this fair, wide land. Brennan's teen years were spent haunting the clubs of Yorkville Village in Toronto, eventually sharing the same stage... more info
Audio: Private Eye
Submit info on this show to our admins