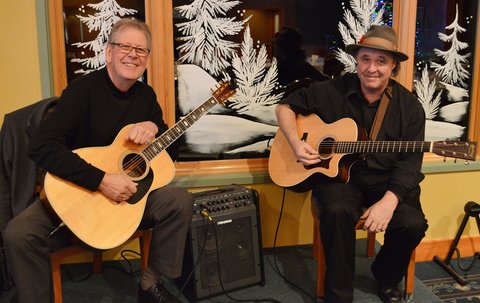 Latin / jazz from Victoria BC
http://www.reverbnation.com/losgringoslocos
Available for Shows/Gigs - Confirmed: May. 1, 2019 (Awaiting Update)

They have developed a steady following playing at numerous festivals and events in Victoria and on Vancouver Island. These include: the Victoria International Jazz Festival; the Latin Caribbean Festival; the Classic Boat Festival; the Dragon Boat Races Festival; and the Esquimalt Lantern Festival. Los Gringos Locos have also been featured at the Butchart Gardens, Vista 18 and the Union Club as well as cafes, arts and crafts fairs, local pubs and lounges and numerous private functions. They have been featured on the A Channel TV morning show and have received favourable air play on local radio stations. Their music has been featured on a number of documentary videos.

"As Los Gringos Locos, Mike and Al are consummate musicians. Real music is felt in the bones and the soul and played freely with engagement and expression. They played the music like a conversation between two guitars. It was ever shifting, alternating back and forth, up and down in volume, sometimes neat chordal runs sometimes bell tone single notes. The favorites were interesting and always pleasingly arranged and the original compositions were a delight. Mike and Al are among the best frets men I have ever had the joy to hear!" - Tark Hamilton, Deep Cove Folk Club

Status: Available for Shows/Gigs
- Last confirmed May. 1, 2019
Submit info on this band to our admins