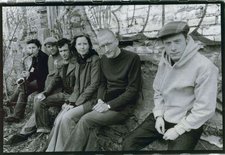 Label: Stomp Records
since circa 2003
One Night Band is a hardworking group that has built its reputation by adding its own flavor to Jamaican classics (Bob Marley, Toots and the Maytals, The Skatalites, Prince Buster, Ken Boothe, etc.), while yielding its own compositions. Highly accessible, the bands music is sure to satisfy anyone seeking to unwind and escape the monotony of the daily grind.

Since its beginnings (2003), the ensemble has toured extensively, seducing audiences with its infectious blend of reggae, ska, calypso and dub. Having given over a hundred performances throughout Quebec, in Ontario and the United States, One Night Band has been featured in various festivals (Pop Montreal, Rimouski Jazz Festival) and events in a number of cities, including Montreal, Toronto, New York, Buffalo, Ottawa, Quebec city, Trois-Rivieres and Chicoutimi. Gradually, the band is making a name for itself on Canadas music scene as the promoter of a somewhat overlooked culture.
Reggae/Ska/Dub
Broken Up

So the tables are now set for another memorable show... This time we've got a mo...

CHRIS MURRAY AND ONE NIGHT BAND ON THE SAME BILL - SWEEET!: Chris Murray, One Ni...

Finally the idea of having Chris Murray and One Night Band on the same bill have...

Finally the idea of having Chris Murray and One Night Band on the same bill have...

VICTORIA'S 8TH ANNUAL SKA FESTIVAL IS GOING TO BE A BLAST!! For the first time e...

Ska and Reggae!: JFK, One Night Band, The Easy Brothers

The Skatomatics, The Expos, One Night Band