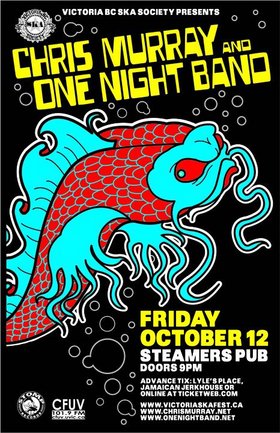 Music: Folk / Celtic / Latin / World, Jazz / Blues, Reggae / Ska / Dub
Finally the idea of having Chris Murray and One Night Band on the same bill have come through for all the ska/reggae Island Massive!

Chris Murray continues to be the North American king of ska playing shows all over the US, Canada and the rest of the world. He continues to collaborate with the bands that uphold the genre (some of the most talented and unknown).

One Night Band will make their third appearance in Victoria fresh off opening up for Neville Staple and Mad Caddies at the most recent Victoria Ska Festival. They will be playing their own material and performing songs with Chris Murray.

Be sure to pick up an advance ticket or come to the door early to avoid disappointment.

Chris Murray is a unique force on today's music scene. Born in Toronto, he earned a strong reputation as a dynamic performer and gifted songwriter as leader of influential Canadian ska group King Apparatus. Upon the band's breakup, he relocated to Los Angeles, emerging as a solo artist with The 4-Track Adventures Of Venice Shoreline Chris, recorded... more info
Audio: Running From Safety, One Everything, Steady Beat Convention

One Night Band is a hardworking group that has built its reputation by adding its own flavor to Jamaican classics (Bob Marley, Toots and the Maytals, The Skatalites, Prince Buster, Ken Boothe, etc.), while yielding its own compositions. Highly accessible, the bands music is sure to satisfy anyone seeking to unwind and escape the monotony of the dai... more info
Audio: Rolling the Dice
Submit info on this show to our admins