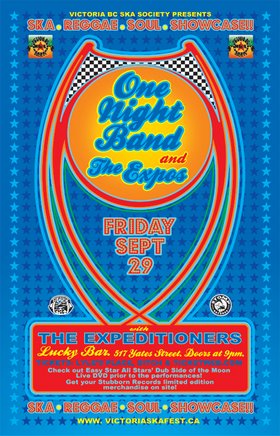 Music: Jazz / Blues, Reggae / Ska / Dub
Victoria BC Ska Society is proud to present two brand new ska/reggae bands on Canada’s music scene. One Night Band hailing from Montreal, Quebec has toured extensively, seducing audiences with its infectious blend of reggae, ska, calypso and dub. Having given over a hundred performances throughout Quebec, in Ontario and the United States, One Night Band has been featured in various festivals (Pop Montreal, Rimouski Jazz Festival) and events in a number of cities, including Montreal, Toronto, New York, Buffalo, Ottawa, Quebec city, Trois-Rivieres and Chicoutimi. Now just signed to Stomp Records, the band is making a name for itself on Canada’s music scene as the promoter of a somewhat overlooked culture.

The Expos are made of up musicians from Toronto’s Makeshift Heroes which appeared at Victoria’s 6th Annual Ska Festival back in 2005. Their music has reggae, rocksteady and jazz influences. The band is touring on release of their new album on Stomp Records!

Local ska outfit The Expeditioners will be gracing us with their upbeat danceable ska with jazz, pop and reggae influences.

DUB SIDE OF THE MOON SCREENING

Prior to the bands performances there will be a screening of some or all of Easy Star All Stars' Dub Side of the Moon (Live DVD) from their concert in September 2005 at the State Theater in Falls Church, VA. The screening of this DVD will be nice way to start out this awesome night of ska, reggae and soul. Easy Star All Stars will be performing in Victoria the week following this show (Oct/7 @ Sugar).

Victoria BC Ska Society will be selling rare Stubborn Records t-shirts and apparel at the show as well as limited edition pins. Be sure to pick up reasonably priced rare merchandise and support the Victoria BC Ska Society in the process to keep producing great presentations and Victoria's Annual Ska Festival. (Merchandise purchase in advance can also be arranged by e-mailing Matt Morrison: [email protected] or Dane at [email protected]

One Night Band is a hardworking group that has built its reputation by adding its own flavor to Jamaican classics (Bob Marley, Toots and the Maytals, The Skatalites, Prince Buster, Ken Boothe, etc.), while yielding its own compositions. Highly accessible, the bands music is sure to satisfy anyone seeking to unwind and escape the monotony of the dai... more info
Audio: Rolling the Dice

The Expos are made of up musicians from Toronto’s eliete (including Makeshift Heroes which appeared at Victoria’s 6th Annual Ska Festival back in 2005). Their music has reggae, rocksteady and jazz influences. The band is touring on release of their new album on Stomp Records released this August 2006! more info

The expeditioners play ska and reggae in a delicious west coast stylee. more info
Submit info on this show to our admins