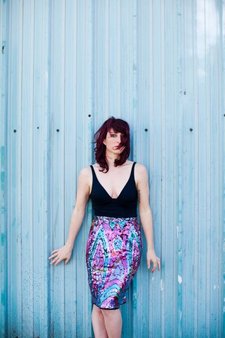 from Vancouver BC
Past Shows (49)

Trumping the name of her critically adored debut album, Hannah Georgas has had a better than “Good” year since releasing her debut This Is Good in April, 2010.

This Is Good, produced by Ryan Guldemond (Mother Mother) and Howard Redekopp (Tegan and Sara, You Say Party, New Pornographers), displays a montage of a self-assured singer-songwriter and rock heroine. The dynamic Georgas is equally comfortable riling up a club crowd with the aptly named “Dancefloor” as she is melting hearts with cabaret number “Something For You.” Her unmistakable voice carries the weight of moody “Thick Skin,” while also lifting the fist-up-in-the-air attitude of album opener “Chit Chat.”

The Vancouver-based Georgas and her debut have garnered national acclaim that’s almost too numerous to count. The many accolades include landing on the long list for the 2010 Polaris Music Prize, gracing the cover of Exclaim! Magazine, being nominated for 2011 XM Verge Awards for Breakthrough Artist of the Year, topping multiple charts on iTunes Canada (Canadiana and Singer Songwriter), nudging elbows in “Best Of” lists such as CBC Radio 2’s top 10 albums of ’10, and snagging the #4 spot on CBC Radio 3’s year end countdown for “Bang Bang You’re Dead.”

Hannah Georgas is no stranger to raving reviews from her peers, audience and press. Her career was launched via winning Music BC’s Songbird West Songwriting Contest 2008 on the strength of her single “The Beat Stuff.” she stole hearts as CBC Radio 3’s fans voted her “Best New Artist” for the 2009 Bucky Awards, and she’s been featured in Exclaim!, The Globe and Mail, Uptown Magazine, The National Post, The Vancouver Sun and many other publications.

Georgas is an injection of new energy to the Canadian independent scene. And she’s doing it all the old fashioned way—with grit and clear self-direction, the kind that took Georgas from open mic nights in empty bars to sold-out shows in popular night clubs.

Hannah Georgas has not stayed still for a moment since releasing two EPs (The Beat Stuff, The Quarter split 7-inch with Mark Watrous) and This Is Good LP in the span of a year and a half. She was chosen to represent BC for The Great Canadian Song Quest of 2010 for CBC, and her songs have been chosen for multiple placements in commercials and TV shows.

She has proven herself as an engaging performer and road veteran after multiple cross-Canada tours in 2010. She has shared the stage with City and Colour, Robyn, Joel Plaskett, An Horse, Mother Mother, and many others. She’s also recently made appearances at Lillith Fair, Osheaga, the Vancouver Folk Music Festival, and Canada Day celebrations in Ottawa.

As for what inspires her to be so prolific, Georgas comments, “I’m pretty open; songs for me are personal and I have no choice but to share them. Somebody else may be going through the same thing as me and you might be helping somebody.” Georgas has found a growing eager audience for her heartfelt and pithy pop tunes. After spending 2010 largely on the road, Georgas is headed back to the recording studio this fall, and a full-length follow-up to This Is Good can be expected in 2012.