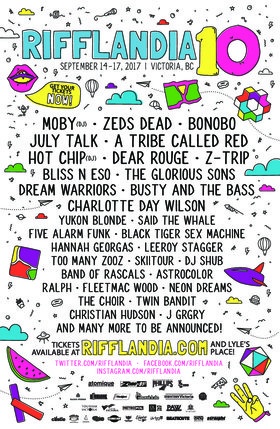 This September 14-17, the tenth annual Rifflandia Festival will take over Downtown Victoria. 2017’s venues include Royal Athletic Park, the return of Discovery Street’s Electric Avenue, and multiple other night venues to be announced along with the final wave of artists and full festival schedule.

Simon Green, AKA Bonobo, is an artist very much at the peak of his significant powers. His 2010 album ‘Black Sands’ was the high watermark of his career to date; a masterful record, marrying Green’s inimitable melodic genius to cutting edge electronics, bass and drums. Black Sands went on to sell over 150,000 copies worldwide, and since... more info

Bursting forth from Canada’s capital, native Producer/DJ crew A Tribe Called Red is producing a truly unique sound that’s impacting the global electronic scene and urban club culture. Since 2010 the group – currently made up of DJ NDN, Bear Witness and 2oolman – has been mixing traditional pow wow vocals and drumming with cutting-edge elect... more info

From an early stage in their career, Bliss N Eso primarily built their fan base from their compelling and energetic live performances. An exhilarating blend of fluid rhymes and banging beats teamed with beat boxing, impromptu freestyling and seamless turntablism make their live shows a brand in their own right, and has seen the group hailed as one ... more info

Fueled By Wine and cigarettes this former Staggers front man is back to grab you by the balls and make you fall in love with his music, when your influences include Steve Earle , Ryan Adams , The Ramones , The Velvet Undergound , The rolling Stones and The blacks Halos to name afew, you can only imagine the sound that ensues. With a promising live ... more info