The long-time bandmates, who began releasing music under the Jon and Roy banner when they were university students, have hit their stride as artists. And with that comes the decision to eschew what once was for what could be on their seventh album.

“We were at a good place when we were recording The Road Ahead is Golden,” Vizer said.

“We were motivated. It felt like the songs were recording themselves, so we made a concentrated effort to work quickly in the studio.”

The pair from Victoria, BC turned to the studio shortly after the first series of rehearsals got underway, pushing aside a long-term plan that would have put them in the studio many months down the road. The songs that make up The Road Ahead is Golden — a record with subtle tones but a purposeful message — took shape with relative ease, and once Jon and Roy got in the studio with bassist Louis Sadava early sessions appeared to bring out the very best in the group.

“Doing it right then and there can often have a better result than if you think about it too much,” Middleton said.

Middleton and Vizer have made a career out of embracing the unexpected, rather than running from it. That approach worked wonders on The Road Ahead is Golden.

The band’s latest record was recorded at a small, rural West Coast studio, a setting which stands in contrast to Greenhouse Studios in Vancouver, where 2015’s Riverside was recorded.

Riverside pushed the musicians outside of their comfort zones, but The Road Ahead is Golden marks a return to organic operations for the group.

HEY OCEAN!'s mellow guitar grooves, eargasmic vocals, and upbeat jazzy licks keep listeners comfortably sitting, standing, or dancing while they are washed out to sea and carefully brought back to shore. Passionate voices, pensive words, and frivolous fun keep this music honest and pure: from the heart, for the soul. more info
Articles: Hey Ocean! – It’s Easier to be Somebody Else
Videos: 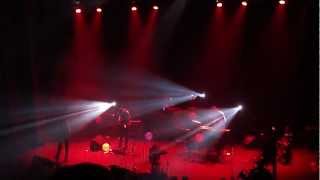 Loving is the collaboration of David Parry and brothers, Lucas and Jesse Henderson. The band came together several years ago as a result of their shared summers working in the capitalist ruins of western Canada’s forests. The seven tracks that came to form Loving’s eponymous debut EP were written and recorded between Victoria and Toronto in the... more info
Submit info on this show to our admins