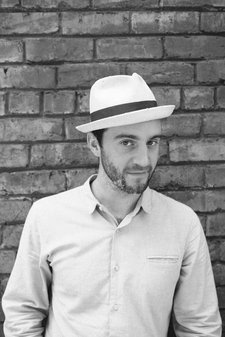 Dougal McLean
dougalbain@gmail.com
Contact Info
Past Shows (13)
A singularity was broken and scattered into trillions of pieces and a few tiny pieces became the Earth. What was dust became a boy, and this boy became an artist. Dougal Bain McLean places his universe at your feet in every show he plays.

Born in Nelson, BC, and raised in Prince George, he was a regular garage band member and the recipient of some all-star instruction from the likes of Toni Stanick of the Vancouver Opera Orchestra and Juno award winning violinist Jesse Zubot. Maturity took him to the lower mainland and Vancouver Island, and into the fold of some formidable acts like Jon and Roy, Dan Mangan, Humans, and Current Swell, for whom he acted as side man and violinist.

But with time and maturity he heard the call of centre stage. An observer of hearts, he began to write, and from his writings he found his voice: warm, complete and playful, a touch of ephemeral sorrow. Paired with his guitar and his first love, the violin, that voice may transport you through the world of loss and redemption, but you’ll marvel at journey all the same.

Because when you hear him play, you’ll know this dusty universe has conspired in his favor.
No audio samples have been linked to this profile.
No member roster has been entered (to link to musician profiles.)