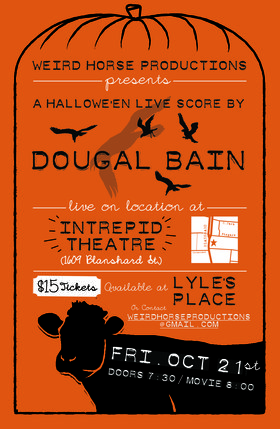 Tickets $15
Available at Lyle's Place, online at https://www.eventbrite.ca/e/a-live-halloween-score-by-dougal-bain-tickets-28164613116 or email us at [email protected] to have them personally delivered to you.

Popcorn and other movie snacks will be available to make the night complete.

Make sure to be one of the early BIRDS to get a good seat.

A singularity was broken and scattered into trillions of pieces and a few tiny pieces became the Earth. What was dust became a boy, and this boy became an artist. Dougal Bain McLean places his universe at your feet in every show he plays. Born in Nelson, BC, and raised in Prince George, he was a regular garage band member and the recipient of s... more info
Videos: