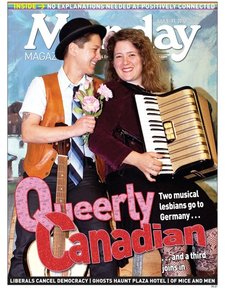 Andrea June is “a wonderful singer and a talented multi-instrumentalist who brings fire to the stage.” Jennifer Louise Taylor, Musician

“a wonderful blend of roots, folk, and heartfelt lyrics. . . when first hearing this new EP [Red Lights, Money and Wine], I am immediately reminded and proud of great Canadian artists, and Auto has joined them.” Jason Valleau, Mountain View Music Festival Artistic Director

From Winnipeg punk to Victoria folk and ragtime, Auto Jansz has earned her musical stripes. As a member of popular roots band, Barley Wik, her songs and style turned many heads in the Canadian roots community. Barley Wik won Album of the Year at the 2004 Vancouver Island Music Awards, and since then, Auto has come into her own with solo recordings and performances that are making Canadian roots fans sit up and listen.

After graduating from the Canadian College of the Performing Arts, and a brief stint in McGill University’s opera program, Andrea June explored the vocal territory of jazz and pop. As a songwriter, she weaves influences from Beethoven to Bartok with the comforting familiarity of roots music to create a sound that is both soothing and unexpected. In 2010, her song, “The Tide,” was shortlisted for the Island Singer-Songwriter contest.

One burly biker approached them after a show and said he was so moved by “The Tide,” that they “actually brought a tear to my eye!” But this is not uncommon. On stage, Auto Jansz and Andrea June offer a marvelous alchemy of sound, combining Auto’s flare for roots, ragtime, and toe-tapping rhythms with Andrea’s vocal lines, running the gamut from haunting to cheeky.

Like old friends, the audience is invited to share in the simple joy of music-making, too. “We’re all in a band together,” Auto says. It’s plain to see in the playful connection they make with the audience, from sharing “stupid clean jokes,” to handing out instruments for hootenanny style accompaniment.
No audio samples have been linked to this profile.
No member roster has been entered (to link to musician profiles.)
Status: Unknown
- Last confirmed Apr. 24, 2013
Submit info on this band to our admins