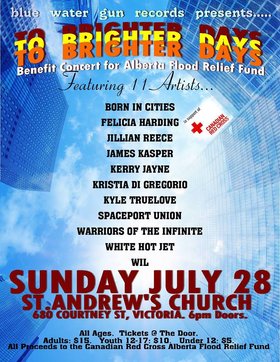 JAMES KASPER (Named Hardest Working Person in Local Music i 2008, has toured and recorded with members of Blue Rodeo).

KRISTIA DI GREGORIO (2006 VIMA Female Vocalist of the Year Winner, has shared the stage with The Paperboys, Lily Frost, and Kinnie Starr)

KYLE TRUELOVE (2013 VIMA Song of the Year Nominee, embarking on an extensive North-Western U.S tour in the fall)

SPACEPORT UNION (2013 VIMA Song of the Year Winners for "Fueled By Consequence," Multiple Nominees from past VIMAs)

warriors of the infinite (the raw shit)

WOTI: music to inspire, shock, and hype up the world. No boundries. No borders. Something new every time. Environmentally concious, in all we do. We Love to Love and Hate to Hate. more info
Audio: Soul Surgery

With a deep love of soulful lyrics and haunting melodies, Felicia offers a magical voice from the Island. She has varied taste (fronting both a rock band and a folk trio) but her solo sound may bring to mind the spirited energy of Bjork or the fierce passion of Dolores O'Riordan with nods to Florence Welsh and fellow Canadian Jenn Grant. Striking... more info

2012 Vancouver Island Music Awards Nominees: Auto Jansz – Female Songwriter of the Year; Andrea June – Female Vocalist of the Year Andrea June is “a wonderful singer and a talented multi-instrumentalist who brings fire to the stage.” Jennifer Louise Taylor, Musician Auto’s songs “have all the classic virtues of roots music while... more info
Submit info on this show to our admins