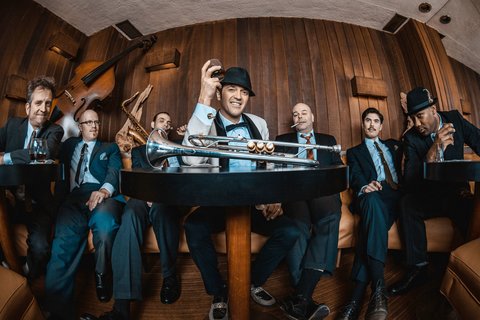 Event Photo Galleries (1)
To break out the new 2019 recording, titled Bigger Life, the Daddies are introducing a throwback SkaPunk set. At select, specially advertised shows, the Daddies will feature both new Skacore style material off of the new record as well as some SkaPunk, Psychobilly and PunkFunk sounds culled from the bands 11 album history, which began in 1989.

The idea is to give modern audiences a flavor of some of the high energy material that the Daddies don’t get a chance to play normally when they perform the elegant, all swing, music set that has become their trademark genre, owing to the double platinum sales of their landmark 1997 release Zoot Suit Riot, in the popular imagination.

To play an late 80’s early 90’s style SkaPunk set has long been a goal for the band. The introduction of the edgy, lyrically substantial material on Bigger Life provides this opportunity. Up goes the volume and out the window go the vintage ties for a one night only, sweat drenched, out of control spectacular.

View all tracks for this artist (4)
No member roster has been entered (to link to musician profiles.)
Status: Available for Shows/Gigs
- Last confirmed Sep. 29, 2019
Submit info on this band to our admins