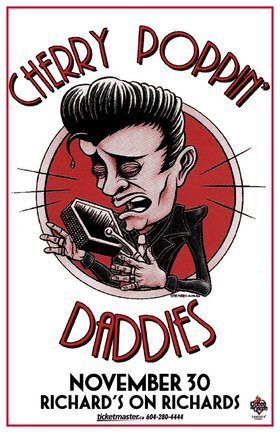 Formed in Eugene, Oregon, the Cherry Poppin’ Daddies cut a swath through grunge with their own unique take on ska, swing and rock. But that wasn’t all—traces of metal, funk, and country-Americana and anything else the eight-piece could come up with can be found on albums like Ferociously Stoned and Kids on the Street. The Cherry Poppin’ Daddies’ sound coincided, and perhaps even helped spark, a swing revival, and the group had a hit with the 1997 title track of its greatest hits compilation, Zoot Suit Riot, a disc that went double platinum.

After a break, and since 2002, the band has been playing an assortment of gigs and writing new material. One of the coolest, strangest, and most fun bands to ever boast Cab Calloway and Rodney Dangerfield as influences, the Cherry Poppin’ Daddies are back to show us the “Brown Derby Jump” and how to “Shake Your Lovemaker”.

other sites: pinterest
To break out the new 2019 recording, titled Bigger Life, the Daddies are introducing a throwback SkaPunk set. At select, specially advertised shows, the Daddies will feature both new Skacore style material off of the new record as well as some SkaPunk, Psychobilly and PunkFunk sounds culled from the bands 11 album history, which began in 1989. ... more info
Audio: Ding-Dong Daddy of the D-Car, Zoot Suit Riot, End of the Night