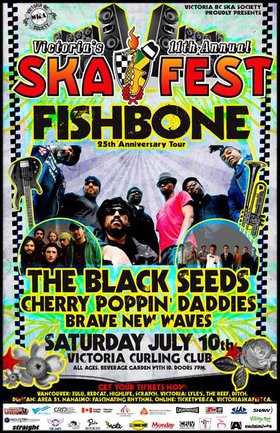 Welcome back to Victoria's 11th Annual Ska Festival Grand Finale Concert! We had our 10th Anniversary Celebration last year and now we're celebrating the new decade with a bunch of awesome bands that will keep you dancing from beginning to end. This line-up KILLS!! First off, FISHBONE will be celebrating their 25th Anniversary this year and will be the headliners of Victoria's 11th Annual Ska Festival. We had them back in 2005 and we're stoked that they're ripping it all around North America and the rest of the world with their irresistable ska,reggae,funk, jazz and everything in between styles + they've got more energy than 90% of the crowd that watches them on any given night! Can't wait;)

And then the sweet sounds of Kiwi reggae... THE BLACK SEEDS are one of New Zealand's top reggae bands and they will be making their Canadian debut at Victoria's 11th Annual Ska Festival. Big ups to Easy Star Records for always having sweet bands on their label! Also as a side note: Did you know Bret McKenzie from Flight of the Concords used to be in this band? He reps the Black Seeds big time;)

And then CHERRY POPPIN' DADDIES... One thing we can say is thank goodness they live close to Victoria! We are most excited to have the band present some of their new and old material. Cherry Poppin' Daddies love ska and finally we've found each other!! They have a new ska album called Ska Boy JFK. Be sure to pick it up in advance or at the show. Right on... Right on!! More party for the people!

And finally we are happy to present one of Victoria's most consistent party reggae/surf/ska rockers Brave New Waves! From their all ages hall shows to their appearances with bands such as Mad Caddies, The Aggrolites and more this will round out the bill into a show you'll never forget...

Fishbone's eagerness to confront, provoke and cross-pollinate enabled them (along with The Red Hot Chili Peppers, The Untouchables et al) to help the early-80's LA/Orange County music scene shake free of the unsavory grip of uninspired rock and "New Wave" hair bands. Since breaking through in 1985 with the frenetic, cross-media smash "Party at Grou... more info
Audio: Ma and Pa, Party With Saddam, Alcoholic

other sites: pinterest
To break out the new 2019 recording, titled Bigger Life, the Daddies are introducing a throwback SkaPunk set. At select, specially advertised shows, the Daddies will feature both new Skacore style material off of the new record as well as some SkaPunk, Psychobilly and PunkFunk sounds culled from the bands 11 album history, which began in 1989. ... more info
Audio: Ding-Dong Daddy of the D-Car, Zoot Suit Riot, End of the Night

DJ Su Comandante has evolved to be one of the most diverse DJs spinning a variety of reggae, dancehall, Latin and reggaeton (reggae infused with Latin influences) on the west coast of Canada. Now residing in Vancouver his music also mirrors his beliefs in revolution and social justice. Coming from El Salvador his Latin influences give a distintive ... more info
Submit info on this show to our admins