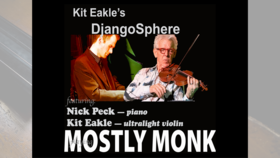 Music: Jazz / Blues
Kit Eakle is a veteran jazz violinist. He appeared in Victoria before the pandemic with the guitar giant, Howard Alden, to enthusiastic audiences. Eakle has a long history in Victoria and on Vancouver Island, living and performing here in the 80s - 90s. After a 25-year stint of living in California, he has permanently returned to Canada

The music of the great Thelonius Sphere Monk has a special place in Eakle's repertoire, having just taught a course on Monk at Simon Fraser University. He's also been influenced by, and shared a stage with, many jazz greats: Lynton Garner and Elmer Gill, Larry Vuckovich and Dan Hicks, Miles Black and Michael Creber, Mads Tolling and Christian Howes.

Joined by Eakle, Nick Peck is a British/Canadian Jazz pianist, B3 organist, composer and arranger based for a number of years in Vancouver, Canada, but who now is living on Vancouver Island. His output has included orchestral works, music for chamber ensembles, jazz orchestras, solo piano and electronic media. He is known for his playing that draws from across the history of a jazz, coloured by experiences in contemporary classical, folk and freely improvised music. His playing on Monk compositions highlights Nick’s deep knowledge of jazz.

"Eck and Peck”, as they have been labelled, have developed their musical relationship over the past 6 month of the epidemic, using online jamming software to play remotely while engaging Eakle’s recent Monk obsession. The Hermann’s appearance will mark their FIRST encounter playing in person! "Stand back," says Eakle, “Sparks may fly!"

other sites: musickit | fiddlejazz
Kit Eakle is an internationally known jazz violinist, author, and educator currently residing in Vancouver, BC. He has been active on the jazz scene in the san Francisco Bay area, Vancouver, and Victoria. His most current project has been called DjangoSphere - featuring the music of Thelonious Sphere Monk and Django Reinhardt in unusual configurati... more info
Submit info on this show to our admins