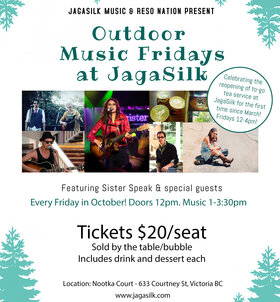 IN-PERSON TICKETS: - $20/seat, sold by the table and includes Live Music and a glass of JagaSilk brewed kombucha each: bubbles for your bubble.*

SISTER SPEAK - sisterspeakmusic.com
Canadian born Sherri Anne returns home to Victoria BC for the fall while the rest of her band is hunkered down in Los Angeles. Sister Speak’s high energy, moving show has led to European tours, festivals, headlining concerts at iconic venues. In concert Sister Speak combines passionate Alt/Blues, and touch of world music. Her new live album is out on vinyl record.

MATT STERN - http://www.mattstern.com
Matt Stern is known for infectious melodies, uplifting energy, and an ability to inspire a sense of community in a diverse crowd.
Born in Montreal and currently based on Vancouver Island, he has been a featured performer at Festivals world-wide and on CBC's Home from the Vinyl Café. Praised by Radio-Canada International for promoting body positivity and diversity, Matt has received awards from the LA Film Awards & the KASHISH Film Festival in Mumbai for his original music videos.

TRUTH AND DOLPHIN - truthanddolphin.com
The Truth And Dolphin Music Project is the 20yr musical experiment of lead singer Jared Nyberg. Cory Christiansen’s arrangements bring the songs to life with textured instrumentation on guitars, banjo, and keys; and infuses a folk funk edge into the music. Live performances feature a range of diverse musical perspectives from folk funk to poetry rock, with rotating accompanists. The project’s focus is on the musical energy, and the connecting piece is Nyberg’s book of poetry.

STEVEN CHMILAR - stevechmilar.com
Ideosyncratic, sometimes quirky original acoustic music by a former hard rock band frontman. While living in Calgary from 2000 – 2008, he played music professionally and won a national songwriting contest in the spring of 2006 at Canadian Music Week in Toronto. A career shift to full-time visual artist was made after the success of his first art show in November of 2011. He currently lives in Sidney, BC where he delightfully paints every day to an ocean view and takes breaks with music jams.

More guests to be announced!

BC Health Guidelines in Place. Outdoor Concert. Capacity: 25 seats. We ask all guests to practice 6 foot distancing from anyone outside their bubble and please no mingling/table hopping. Stage roped off at 10 feet/plexi-glass in place. Tables sanitized before and after use and space 6ft+ apart. Please bring mask for walking in corridor.

“The Stand provides us with a watershed moment in indie-pop” – Indie Music Reviews” “Sister Speak connected with our audience in a beautiful way, through insightful and loving lyrics and with energetic guitar grooves that kept us dancing and wanting more” – Robert Mackle, Sunshine Music Festival, Powell River BC Canadian born ... more info
Submit info on this show to our admins