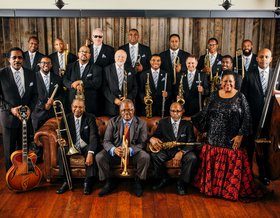 It is common to describe certain cherished musicians as “jazz royalty,” but there is one pianist and bandleader who arguably qualifies as the first among equals. Even 36 years after his death, William “Count” Basie can still sell out a concert hall – a fitting tribute to a profoundly gifted performer whose big band provided a launching pad for such legends as Lester Young, Billie Holiday, Freddie Green, and Joe Williams. Over the decades, The Legendary Count Basie Orchestra, under the skillful direction of Scotty Barnhart, has won 18 Grammys and dazzled audiences at every major festival and concert hall in the world. Their 2018 Grammy-nominated album, All About That Basie, remakes classic swing and blues classics with guest appearances by modern artists including Take 6, Stevie Wonder, Kurt Elling, Joey DeFrancesco, and more. The 18-member CBO blends hard-swinging, horn-driven power with rhythmic finesse and a luxuriant ensemble sound. Featured vocalist for this performance is the captivating Carmen Bradford, originally hired by Count Basie himself. She first sang with the CBO in 1983 and is cherished for her earthy, blues-tinged interpretations with a voice reminiscent of Sarah Vaughan and Ella Fitzgerald. Don’t miss the 85th anniversary tour of the most explosive force in jazz!