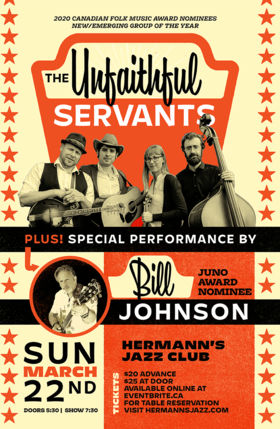 Music: Country / Bluegrass / Rockabilly
**If you have purchased tickets for this show, you will be contacted shortly directly.**

Very Excited to announce our next Victoria concert. March 22nd at Hermann's Jazz Club with the great Bill Johnson!

ONE NIGHT ONLY ~ A SPECIAL EVENING OF MUSIC

The Unfaithful Servants have quickly gained a reputation in Western Canada as a must-see act. With an original and exciting approach to acoustic music, the group serves up explosive instrumentals, compelling story-telling and high-powered vocals. As Kelly Nakatsuka (Islands Folk Festival, CBC host) describes "The Unfaithful Servants are one of the most exciting bands from Vancouver Island in some time...gorgeous harmonies and fine song writing, beautiful instrumental interplay and some seriously rippin' solos." With critically acclaimed performances under their belt (Vancouver Island MusicFest, Salmon Arm Roots & Blues, The Islands Folk Festival) and a recent nomination for a 2020 Canadian Folk Music Award for New/Emerging Group of the year, their debut album continues to build upon that buzz. https://www.unfaithfulservants.com

Bill Johnson of Victoria BC on Vancouver Island, began playing guitar at the age of nine. At first his guitar caught the ear of a few great band leaders. As a sideman those bands have included some legendary and well respected respected blues artists including: Hubert Sumlin, Cash McCall, Son Seals, Donald Ray Johnson, Rita Chiarelli, Big Dave McLean, Dutch Mason, Suzy Vinnick, and David Vest. Presented solo on acoustic guitar, or with his band, he has opened shows for Otis Rush, James Cotton, Dr John, Paul Rogers, Keb Mo, Colin Linden, and so many more.

Whether solo, or performing with a band, playing traditionally or with a slide, his ability to create beautiful tones and a passion for the blues is instantly apparent. Even though he has only scratched the surface in traveling Canada, a Juno nomination in 2012, and four Maple Blues Award nominations have earned him a lasting place among the countries top blues artists.
https://billjohnson.bandcamp.com/album/bill-johnson-blues-band-live