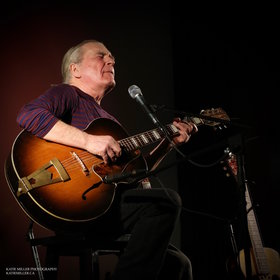 Ken learned to play during the 1950,s, when guitar slingers like Elvis, Buddy Holly, and the Ventures prevailed. In the 60's, music went through coffeehouse folk and electric rock and clues phases, and Ken was swept up by these influences,playing in blues based bands in Thunder Bay like Tundra and the Bay St Blues Band, and eventually going acoustic with the release on vinyl of Ken Hamm and Friends in 1978.That LP led to a string of positive reviews and nominations in publications like Guitar Player magazine. A juno award in 1991 was followed by the Great Canadian Blues Award in 2010.Hamm has recorded 8 CDs to date, including a double disc live collection.

After some time in Calgary, and 25 years living in coastal BC,Ken moved to Forget,SK in 2007, and married his wife Heather there in 2009. For nine years they operated a small music store including teaching and instrument repairs. Currently Ken is back touring western Canada both solo and in combination with others such as Big Dave McLean.Guitar workshops are often included in touring plans. Ken is also currently involved in producing and recording projects including the release of a brand new album. http://www.kenhamm.com

Please note the Upstairs Lounge is a licensed restaurant and bar, doors open at 6 pm for dinner service, the concert starts at 7:30 pm. THIS IS A LISTENING VENUE

Advance tickets at Oak Bay Recreation Centre (in person or by phone), at Nicholas Randall Ltd., 2180 Oak Bay Avenue and online at Eventbrite.ca