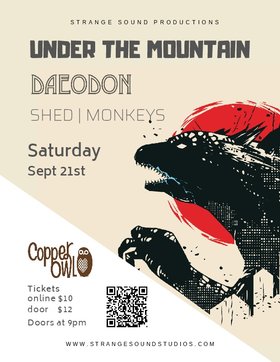 Under the Mountain's sound is described by members of the band as "somewhere between Hard Rock and Heavy Metal". Fans have refered to it as "balls out Rock n Roll". Uncontrollably, you'll find your head banging, feet stomping, and fists pumping to their hard hitting heavy riffs. Under the Mountain recorded their first full-length self-titled album in 2012-13.

Daeodon gives an edgy performance not to be missed. Founded in Victoria BC. Canada, mid 2018, the alternative hard rock group quickly became known for their heavy riffs, narrative lyrics, and solid groove. They have played with artists such as We Hunt Buffalo and Boy Leadfoot; were finalists in the Darcy’s Victory to Vinyl competition and are on the verge of releasing their debut EP for Summer 2019.

Rock-and-roll from outer space, take a ride and melt your face. Shed Monkeys are a brand new four piece moody rock group from Victoria BC pulling their influences from blues and psychedelic rock all the way to electronic music. With two powerhouse vocalist upfront to the steady yet experimental rhythm backing them up, these monkeys know how to groove.

Under the Mountain (Rock n' roll)

It's scary to think of a world where Rock and Metal music is dead and gone. These days, it seems that Pop music has managed to dig its pink-painted claws into each and every form of Rock music there is. Under the Mountain will have none of it. The Canadian-based four piece hard rock band came together during a time of steady decline of badassdom o... more info
Audio: Thrash, Between My Teeth, One More Line

Shed Monkeys are a four piece modern rock band from Victoria, British Columbia, Canada. Drawing inspiration from artists such as Reignwolf, Cage the Elephant, The Dead Weather, and Rage Against the Machine, Shed Monkeys has cultivated a polished yet gritty sound. With two powerhouse vocalists up front and a steady yet experimental rhythm section ba... more info
Submit info on this show to our admins