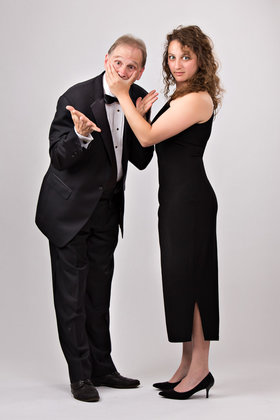 Father-daughter team, Joey and Phina Pipia bring their all-original show to the Victoria Fringe Festival; an hour of wow-worthy, knock-your-socks-off entertainment that keeps audiences hooked from the first moment.

Mind-boggling predictions are revealed, spirits summoned from the beyond, and thoughts pinched effortlessly out of thin air. With a flair for the innovative, Joey and Phina take audiences on a journey overflowing with laughs and gasps.

“Every effect you see is entirely original,” says Phina Pipia, “our goal is to give audiences an experience they have never had before, and that they will never forget again.”

Each act is steeped in the unexpected. The duo might psychically channel a Beatles song using an instrument you play with your brain, take a mental X-ray of an audience member’s foot, or telepathically deduce the murderer in a game of Clue.

At the show’s peak, audiences are treated to a recreation of the 17th century effect, “The Spirit Cabinet” in which a ghost is summoned into an onstage chamber. In The Psychic Dynasty version, Joey and Phina channel the spirit of Johnny Cash; a whimsical choice that involves putting the medium “under” while the audience sings Cash’s classic song, Ring of Fire.

“We are committed to amazement in its purest form,” says Joey, “our goal is always to transport audiences to a place of both laughter and awe.”

The Psychic Dynasty is packed with tightly-scripted dialogue and unbelievable reveals. It is an example of the best kind of entertainment; you never know what might happen next, and when it does, you want to tell everyone you know.

Fast-paced, funny, and at the highest caliber of mind-reading; The Psychic Dynasty promises lightning-speed entertainment that amazes audiences young and old.

More information at http://www.ThePsychicDynasty.com, by email at [email protected], or by calling 360-774-2965. Tickets available online at victoriafringe.com, ticketrocket.co; in-person at Ticket Rocket (1050 Meares St.), or Fringe HQ (2-1609 Blanshard). Or at the door 30 minutes before curtain.