Join Argentinian pianist and composer Gabriel Palatchi, for an eclectic musical journey with his original blend of cultures such as latin jazz, tango, funk, middle east and more, as part of his cross Canada Tour!

Born in Buenos Aires, Argentina in 1982, Gabriel Palatchi started his first piano lessons at the age of 8. He spent his formative years in Buenos Aires studying classical piano, and being mentored by some of the great maestros of blues, tango, jazz and Latin jazz. After graduating in 2007 from Berklee international School, Argentina, he spent several months in Cuba where he studied latin jazz with the master “Chucho” Valdez.

Gabriel subsequently became a composer when he moved to Tulum, Mexico in 2008, and his life experiences up to that point influenced the composition and production of his first solo album “Diario de Viaje” (Travel Diary) in 2010.

The album received critical acclaim from music industry journals, and was chosen as one of the best Latin Jazz albums of the year by JAZZ FM Toronto. He went on to record a further 3 albums that cemented his unique sound, culminating in his 4th and latest album, “Made in Canada” (2017), which also happens to be his first live recording.

Gabriel’s songs are a representation of the many cultures which have influenced his music over the years, with a deep core in latin jazz.

For the past 8 years Gabriel has been performing at major international music festivals, touring throughout Mexico, Canada and Europe. His music is broadcast across radio stations all over the world from Alaska through to South America, Europe, the Middle East and Australia It has been reviewed and featured on Rolling Stone Magazine, Latin Jazz Network, Ejazznews, All About Jazz, Jazz Caribe, The Toronto Star, Salsa Son Timba Colombia, Newstime South Africa, and Inside World Music amongst many others.

“Trivolution” was selected as the Gold Medal Winner in the Composer/Album categories; achieved TOP TEN status in the 2015 “Global Music Awards”, and also featured in the “Emerging Artists” section of the April 30th, 2016 issue of BILLBOARD MAGAZINE.

“...One of the new young lions of Latin jazz…”- www.ejazznews.com 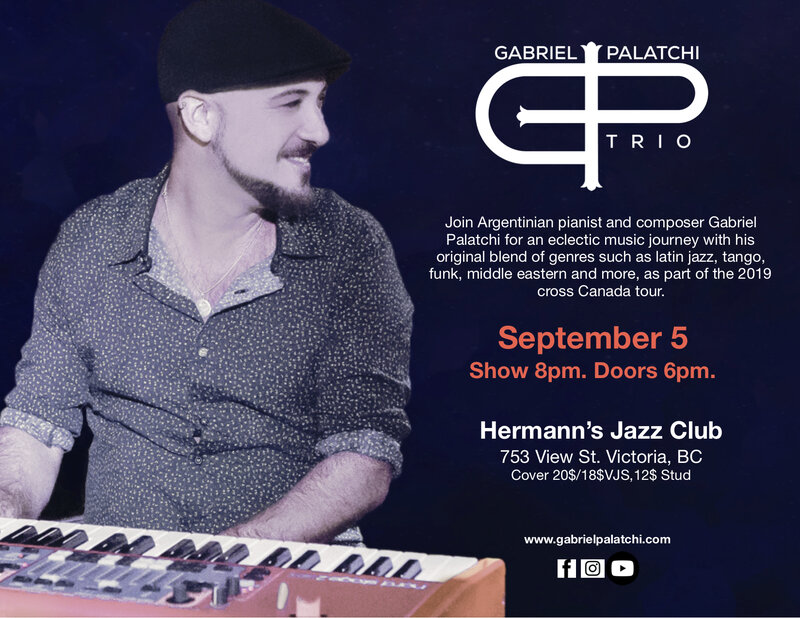