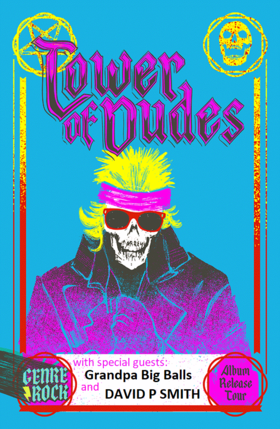 This is an all-ages, no booze, no-jerk event.

Tower of Dudes release their brand new album!
There will be an enormous amount of smoke machines and lasers. Probably some cupcakes too.

Joining us will be Grandpa Big Balls AND David P Smith!

Do you want to know about The Tower of Dudes New Album?

It's called Genre Rock
The Tower of Dudes have grown tired of being a gypsy cow-punk folk band. They had released a 2018 album called “Boring Country Songs” to little acclaim. So, the band made a pact to travel to the six corners of the globe, in search of musical inspiration; each band member set out on a personal quest to find exciting new sounds. A new era has begun, and the possibilities are endless!

Kind of. Actually, the possibilities are…six. As it turns out, each of the six band members “discovered” a different sub-genre of Rock Music. But the band could not decide which sub-genre of rock to pursue. So, they recorded all of them and left it up to you, the listener, to decide what sound they should pursue.

The Tower of Dudes is a high-octane, traveling folk-gypsy-country-punk band that employs an impressive variety of instruments. Their energetic stage presence and rapid fire delivery has been known to incite dancing, chanting and demented sing-a-longs that only end when this band of half-crazed misfits either pass out, or explode. Their eclectic... more info